90 Seconds to Your Free Private Lesson with Master Corley; Value $100

SHARE YOUR GOALS WITH MASTER CORLEY, AND HE WILL ADVISE YOU AS TO THE BEST COURSE OF ACTION FOR YOUR SUCCESS

YOU CAN TRAIN WITH MASTER CORLEY AT A PROFESSIONAL STUDIO IN EAST COBB OR IN SANDY SPRINGS, CRABAPPLE  OR IN YOUR HOME OR OFFICE ENVIRONMENT

Master Instructor and 10th Degree Black Belt With a Mission

(Joe Corley is personally instructing Private Executive classes or for Family or Corporate Groups in locations of East Cobb, Sandy Springs  or Milton / Crabapple / Alpharetta or in the homes or corporate offices of his clients.)

Master Corley is a native Atlantan, a 10th Degree Black Belt HALL OF FAMER and a global sports entrepreneur with a mission. A master instructor with more than 4 decades teaching experience in the martial arts and the producer of PKA WORLDWIDE kickboxing for television, Joe Corley’s life-long purpose for being is to share with everyone the positive feelings of confidence, courage, intensity, focus, personal discipline and integrity engendered by good martial arts training and competition. He has done that through the promotion of the martial arts in his Atlanta chain of studios and on television around the world.

His current mission as Master Instructor is to provide a real-life sense of personal safety in what many call “a world gone mad” for his private clients and families.

Joe Corley began his karate classes at age 16, earned his black belt at 19, opened his first studio at 20, then won three US titles in his first three years in operation; he founded the Battle of Atlanta World Karate Championships (still considered one of the World’s Premier Martial Arts events) at age 23 and has fervently spread the word ever since. As a fighter and Black Belt in Tang Soo Do, Tae Kwon Do and American Karate, Joe Corley  went on to retire as the number one ranked MiddleWeight Contender in the world. Mr. Corley has taught more than 50,000 men, women and children in his chain of Atlanta studios. His BATTLE OF ATLANTA,  celebrated its Golden Anniversary in 2018.

He was inducted into Black Belt Magazine’s HALL OF FAME, considered the most prestigious in the industry, as a tribute to the variety of his contributions to the arts. There he joined such dignitaries as friend Chuck Norris, Bruce Lee and other martial arts legends, whose life’s works have impacted so many.

Master Corley was also inducted into the Tae Kwon Do Hall of Fame in 2007 and featured on the cover of Who’s Who in the Martial Arts Legends edition in 2017.

Mr. Corley became the Voice for American Karate on national television, where he produced the programming from the announcer position and did commentary with long-term friends like Chuck Norris and Pat Morita on NBC, CBS, ESPN, SHOWTIME, USA NETWORK, SPORTS CHANNEL AMERICA, PRIME NETWORK, SPORT SOUTH and on international television syndication. As expert analyst and host for PKA Karate World Championships on network, cable and pay per view, Mr. Corley became synonymous with the sport to the millions of fans who followed the 1,000+ hours of coverage on television. With events originating from diverse global sites–50 cities in the United States, Canada, France, Belgium, South Africa, South America and the United Arab Emirates–Joe Corley has educated  3 generations of sports fans.

But the thing that continues to drive Joe Corley is the knowledge that he can use his experience and accomplishments to share with clients in Atlanta and martial arts fans around the world on television the great feelings of confidence, courage, discipline, honor and integrity that come from learning the martial arts properly. Master Corley continues to strive in order to achieve his life-long goals, bringing karate, tae kwon do and kickboxing to as many people as his personal efforts and television campaign can reach. His global PKA television projects provide the forum for spreading the right messages internationally. In 2020 Master Corley is working with global broadcasters to increase this international audience.

“It is a real honor and privilege to work with such a great wealth of talent over these great years of building interest in martial arts”, Master Corley said. “Our students of all ages over these years have received the very best in instruction from a group of highly proficient and dedicated instructors devoted to the well being of those in their charge. Teaching today’s executives and their families and referring students to our great instructors conitnues to bring me the same personal satisfaction it has for all these years in this, my chosen field of endeavor”. 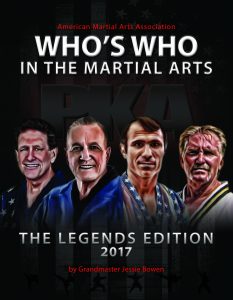 Master Corley, left, was featured on the cover of the Who’s Who in Martial Arts Legends 2017, earning a Lifetime Achievement Award for his competition, television series and instruction history.

Whatever your objectives, Master Corley has the experience to help you succeed–or send you to someone who can.

Visit us to join our Martial Arts Family at Master Corley’s “Home Studio” at 3000 Johnson Ferry Road, Suite 210, in the Center just south of Walmart and the YMCA.

AND / OR FREE GROUP CLASS